Home » THE POWER OF ONE 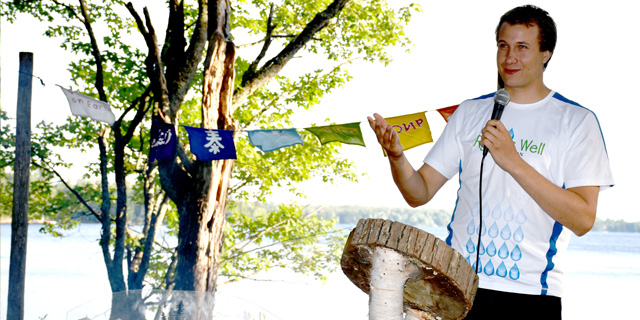 Our Manitou theme for the summer is the ‘POWER OF ONE’ and how one person can make a difference in the lives of others no matter what age they are, background or where they are from. Last night we had our Freshkids’ present after our candle ceremony honouring one child from each unit for representing positive values. Over twenty campers presented on the power of one, making wonderful comments such as:

“Lots of great things started with the power of one. ‘The power of one is getting people to do something you believe in even though people tell you not to do it. A small change can make a big change in life.’

“On December 1, 1955 one woman refused to give up her seat on the bus, protesting the unfair treatment of African American people. Rosa parks went on to be one of the founders of the American Civil Rights movement…”

“Nelson Mandela was imprisoned for 26 years because he tried to help people in South Africa be treated without prejudice. He refused to back down in his fight to do what was right….”

We then welcomed Ryan Hreljac founder of ‘Ryan’s Well’ deliver a touching and powerful talk on how at the age of seven, he raised $70 dollars to provide clean water for a well in Africa. He discussed how he was just a typical kid in school who didn’t participate but couldn’t understand how someone couldn’t have clean water. After a year, he had raised $2000 and even appeared on the Oprah Winfrey show, being praised by Oprah for all his wonderful community service. Three years later he had raised $750,000 in total. He now runs the Ryan’s Well Foundation (www.ryanswell.ca) at age 26, raising over one million dollars each year. After he spoke, the kids swarmed Ryan as if he were a celebrity because they were so excited to meet someone that could make such a positive difference in the lives of others at such a young age.

Afterwards, he spoke to the Senior’s and CIT’S about his relationship with a boy Jimmy, who he visited in Uganda at age 10. They became best friends. A few years later Jimmy’s family was killed by rebels.
Ryan and his family decided to bring Jimmy to Canada and he received refugee status immediately. We discussed how Canada is such a special country and in the wonderful position to save people like Jimmy and how important it is to help people around the world and bring them to Canada. Ryan explained how Jimmy became Ryan’s brother, and now Jimmy is happily married and Ryan was his best man at his wedding..

Best of all was how captivated, respectful and inspired all our campers and staff were during this wonderful Fireside chat. Proving once again Manitou is more than just incredible activities, wonderful staff and our magical setting, it indeed is a place to grow!