Home » The final community week numbers are in, and world games has officially begun! 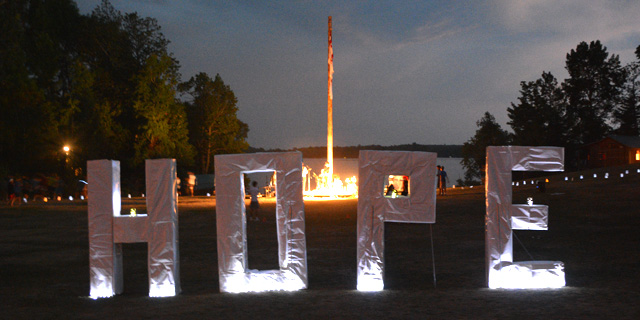 If it seems like it’s been a long time since you last heard from us, that’s because IT HAS!

Over the past week, we put out our final 2016 edition of the Manitou Mosquito. Community Week wrapped up with a series of wonderful activities: rock, theatre and guitar sang at the local seniors’ home, campers filled out paper stars to “award” to staff and their fellow campers in the dining hall, and the campers coloured in whiteboard “Possibility” signs that we stitched together into the inspiring video above. When all was said and done, the campers’ fundraising initiatives helped to raise a final total of $8,130 for the Amani Home.

But aside from a final Fireside this past week, there wasn’t much time to sit down. Because as soon as Community Week ended, World Games began!

Yep, World Games 2016 has finally arrived, and camp is nearly unrecognizable. Far from the unified group that once sang “These Friendships,” camp has now been parted into a sea of purple and orange as two “countries” battle it out in a three-day program of skill, creativity, spirit and sportsmanship.
This year’s countries are Peru (purple) and Madagascar (orange). Our fearless captains leading the charges are Lizzie Moscoe, Adam Dennis-Birnbaum, Jonathan Grammer and Emily Chambers. And while deep down, everyone knows that it doesn’t matter who wins or loses, you’ve never seen a competition this fierce. The teams are neck-and-neck, each one having swept different activity categories and events. Peru won Track & Field, Madagascar won Fashion Show; Peru won Spirit Lunch, Madagascar won the dance-off; and so on, and so forth.
Anyone who’s ever been to Manitou knows how deep the World Games rabbithole goes. For many kids, this program is awaited with even more anticipation and fervour than camp itself. There’s an indescribable electricity in the air, a feeling that magic is all around you everywhere you go. And no matter who wins, a Manitou kid never forget their country’s cheers, or their captains, or how good it felt to see their flag fly.
Of course, we’ll be sure to let you know which team comes out victorious. Until then, stay tuned on Facebook and Instagram as we post updates on the games!

2 thoughts on “The final community week numbers are in, and world games has officially begun!”