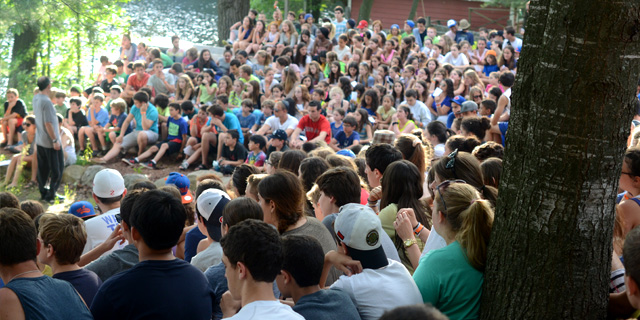 At Manitou, one of our best-loved weekly rituals is Friday Night Fireside. After Friday’s dinner each week, campers and staff gather around a crackling fire next to a peaceful spot on the lake in order to watch the sunset, reflect on the past week, and think about what it is that makes each of us an individual with unlimited potential to effect positive change.

Due to the current fire ban in the Parry Sound region and a rained out Friday night, we held a fireless fireside on Saturday evening. It was amazing to see everyone go with the flow and maintain a sense of the significance of the occasion. Every day at camp is one of learning, community-building and reflection, but there are some values you really come to embrace at Friday Night Fireside.

Whether these values came from our campers’ “Camp Is” speeches this week, from the heartwarming story of a resident of the Amani Home, or simply from the tried-and-true Manitou song and poem we do without fail every Fireside, here are three things campers and staff took away from last night’s special evening.

1. You can find lifelong friends in unlikely places.

A junior camper, Zack, spoke beautifully about his camp experience. This being his second year, Zach put the focus on how camp can really surprise you, from the activities you end up loving to the friends you end up making.

“I guarantee you’ll make at least one new friend at camp,” he said.  “It might even be me, that’s your new friend.”

Something we often take for granted is that friendship knows no age, gender or lifestyle. As we learned from Dr. Karyn Gordon, the best friends are simply those who are kind, inclusive and assertive.

A Freshkid camper, Lilly, wrote: “I was a bit scared when I first started, but then I met the people who are now my friends and it started to feel like home.”

That’s the other thing we take for granted about friendships: they’re as strong as family. During pre-camp, the staff heard a poem that explained the difference between simple friends and real friends:

A simple friend has never seen you cry.
A real friend has shoulders soggy from your tears. […]

A simple friend hates it when you call after he has gone to bed.
A real friend asks you why you took so long to call.

It was clear from their thoughtful words that all of our “Camp Is” speakers had found real friends at Manitou. No two origin stories of true friendships are alike, but the strength of those friendships is universal.

“Camp Is” speaker Natalie’s (rhyming!) message about friendship was not lost on us, either:

“Friends we make here are so special, fun and clever,
The memories we create, will truly last forever.”

2. You don’t “get” what camp is about until you experience it for the first time. Then, it’s everything.

There’s a reason that generations of family end up at summer camp. It has nothing to do with tradition, and everything to do with the passing down of an inimitable experience that goes beyond words.

Another “Camp Is” speaker, Joey, is now in his second year at camp. He shared two things we couldn’t have said better:

“I want to acknowledge that coming to camp for the first time takes a lot of bravery.”

“From the first moment through the gate, I knew that this place would be unlike anywhere I had been before.”

The first year at camp can be overwhelming, as many of our speakers acknowledged first-hand. It’s hundreds of people you’ve never met, it’s buzzing with nonstop energy, and there seems to be an endless stream of inside jokes or longstanding traditions you don’t understand. But Joey had some thoughts on what camp quickly came to mean to him after that first moment through the gate:

“Being able to be with your friends. That’s camp. Having a sense of independence. That’s camp. But really take a second and think about it, you are sitting around a campfire, smelling the s’mores fresh out of the fire. Your section heads singing you songs, while some of the staff are strumming their guitars. That’s camp. At Manitou, I feel important. This camp makes you feel important.”

We always talk about how much can be accomplished in “camp time.” This place exists on a clock that runs almost like a dream, where mere minutes here seem like hours or days. So much can be learned and accomplished here, such strong bonds with others can be formed. In a matter of hours, you can go from feeling nervous about a group of strangers to feeling like a camp celebrity among your friends and counsellors.

Freshkid and second year camper Ava made a speech with a great point about trying things for the first time: “I hated the lake, but I recognized it’s not so bad.”

“For anyone that feels uneasy about getting used to camp,” said another speaker, Noah, “don’t worry. I promise you’ll love it.”

3. The greatest challenges make for the best memories.

Oftentimes in interviews or on applications for job opportunities, we’re asked to discuss past experiences where we exemplified qualities of teamwork, positivity or leadership. Which experiences jump to mind? The challenging ones, of course.

“Camp Is” speaker Justin talked about how last year at camp, he “got to try so many fun activities that [he] had never tried before like wakeboarding and photography.” He concluded by saying that he was excited to “make so many more memories and have another amazing summer.”

Another speaker, Josh, echoed this sentiment: “While we are at camp, we are experiencing things that we could have never encountered before.”

By providing those unique experiences, such as Adventure Park, waterski-ing and campwide competitions like Tribal Games or World Games, camp both challenges and enriches everyone who takes part in it. And it is those new and often challenging experiences that become emblazoned in our minds as seminal milestones, formative memories. We remember the times we struggled, whether joyfully or with some sorrow, and we use those memories in times of adversity to remind ourselves of how strong we truly are.

Challenges can be light-hearted, but they can also be serious and life-defining. At Fireside, Mark read out the story of one of the Amani Home’s longtime residents, Bertha.

“When [Bertha] came to Amani, it was very difficult to find out who she was, and the reason she was on the street. […] Bertha was very challenging in the beginning. She was always crying, always calling for attention and the staff had a hard time dealing with her. But she is much better now, she is in our in-house education program. […] We still don’t know what happened to her, but today she is so much calmer and happier than when she came.”

Because Amani’s staff didn’t give up on Bertha despite the challenge of getting to know her and her story, they gained her trust. They put their faith in her, and in turn, she put hers in them. Now, Bertha is off to public school and no longer living on the street. She is her own success story.

This year’s Fireside theme is “Redefine Possible.” Our two speakers later this summer, Spencer West and Talli Osborne, will talk about how they overcame all odds, and turned seemingly insurmountable challenges into personal narratives of triumph.

Stay tuned for blog posts, because we’ll be talking all summer long about these three ideas along with many others! But we’ll close off today’s post with a final meditation from a camper named Jamie, whose speech touched on something we can all especially relate to: dreaming of Manitou for all the other days of the year that we’re not here.

“During the year, I head dreams of being here and felt like it was real,” she wrote. “But then I remembered that I was never actually on the bus. Now that I have been on the bus and I’m finally here, I’m excited to do this all again!”