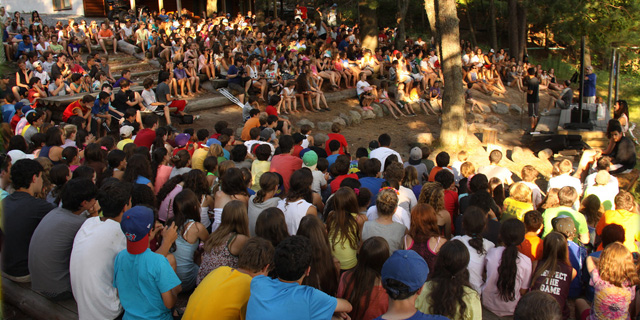 We are sailing into second session–We can’t believe almost 250 new second session camper arrived (an all-time record)!  But the nicest part is how well they are adapting to camp.  This is in large part is due to the camp culture where long-time campers welcome the new kids and where the first month campers understand how important their role is in making the second session campers feel supported.

And speaking of feeling supported, we had the pleasure of hearing six campers who were new last summer along with two wonderful CITS speak about their experiences and remind the campers who just arrived that they don’t need to worry because this place will become their summer home before they know it.  As of today we are removing the word ‘homesick’ from the Manitou vocabulary and replacing it with ‘HOME THINK!’

These are some small sounds bites of what the campers had to say at Fireside last night:

“First the great staff here told me it was normal to be homesick and suggested I make a big project in woodworking.  This really kept my mind off of being homesick and after a few days I noticed I wasn’t homesick any more.  It was just that I was thinking about home so I called it “home think” …. I went to camp with only three friends and came home with six …So, homesickness is normal and we should rename it HOME THINK. The friends you will make at camp will help you through the bad and bring you the good. And finally, have FUN!”

“Last year my parents made me go to camp and I didn’t want to, but I went anyways.  I came to camp really shy …my friends helped me speak up and say something.  I left camp so much more confident than when I first came.  Now when people ask me questions I give full answers instead of just a yes or no. Not speaking to people and being shy was my biggest challenge before I came to camp.  So in the end coming to camp will change you for the better and you will always want to come back”

“It’s the people that make camp special for me. I have to admit there were times when I was homesick (or I guess Home Think now) last year but there was always someone to help and through those times is when I connected with so many people.  I recommend all the new campers this summer to just enjoy all your activities, memories and simple moments at camp like cabin time with your friends, or eating tuck and I promise this summer is going to fly by ….”

And finally from our CITS:

“From a young age we are taught the importance of helping others. Something we have learned from Manitou is the value of giving back to the community and the value of charity …Manitou represents this idea and is why our camp is unique.

And speaking of giving back, tonight at this same Friday night Fireside we had two amazing guest speakers; Max Daviau and David Levine two former campers (and staff), who took it upon themselves at age 23 to start their own charity – “Lay up Youth Basketball”.   Max who first started the charity four years ago, along with David explained to the campers that they started this charity from nothing, but what originally seemed like just a job became so fulfilling and fun because basketball was their passion and they loved seeing the impact the charity had on those in need. Kids were inspired as they learned how to start a charity from scratch, and also received the most important message that giving back is actually selfish because it just makes you feel so happy!

Check out Lay-up Basketball to learn more about the services they provide at www.lybs.ca. Congrats to you all and thanks for sharing your story with our Manitou Family