Home » Camp is: Mike Plume, a morning parade…. and an election? 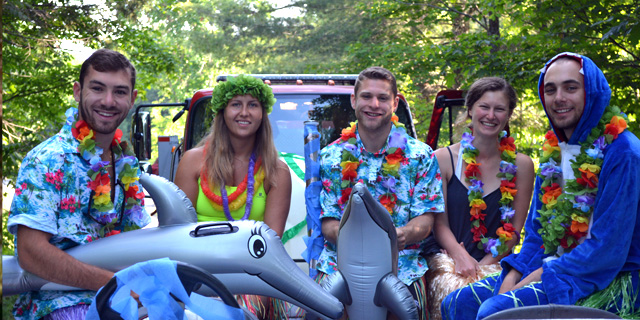 Ask adults in any big city, and you’ll hear about how they love their lazy summers. Hammocks, cold drinks, and long naps on the beach are the tenets of the season. But ask any of the adults at a summer camp, and you’ll get a totally different answer. The grownups are as keen to get active as the kids. And without a doubt, the past few days at camp have been some of our busiest and buzziest to date, for campers and staff alike!

First, the staff got to see Mike Plume live in concert. Plume is a Manitou legend, so his annual visits are awaited with much anticipation. Once again, he gave us an unforgettable night of soulful blues and catchy rock tutes, playing through his new songs alongside the old favourites we’ve had stuck in our heads all year long (Manitou folk are some of Plume’s biggest fans). As many of you know, Plume also used to head up our very own Rock program before moving on to a life of touring and full-time music making. Suffice it to say, we like the guy. And we’re pretty lucky he likes us back.

Then, this morning, something big happened.

The whole camp was called down to the main path at 8:30am; no one knew why. At first, there was silence. Then, out of nowhere, the sound of bagpipes. CIT Coordinator Alec Amato appeared around the road’s bend with a piper, brandishing his royal scepter and leading what turned out to be a bonafide FLOAT PARADE.

Float after float followed Amato’s lead; it was truly unbelievable! The head staff had put together all kinds of themed carts and trucks. You’d think that you saw it on Mulberry street: a mariachi band, dancers, a fully costumed “Just Married” couple in their buggy, a drumline of kitchen buckets, Tony the Tiger and Manny the Moose, a live rock band on a flatbed, Sole Power entertainers dressed as Drake and the Week’nd, jugglers, a pirate ship, a luau skiboat, a firetruck, a dump truck full of revelers spraying silly string and bubbles, canoe trippers portaging canoes, a king on a throne, camp dogs, a decorated lawnmower, and even a Christmas sleigh pulling “Santa” and her reindeer.

As campers fell in line behind the floats, the parade weaved its way over to the hangar, where Sole Power’s DJ team was waiting with a “Breakfast in Paradise” themed dance party featuring muffins, danishes, fresh fruit and free baseball caps.

The dance was over by 9:15AM, and activity periods continued as planned. No traces of the floats remained. Was it all a dream? Only the occasional Sole Power baseball cap seen around camp proves it wasn’t.

Lastly, an impromptu election season is upon us. As the US primaries continue, Canada’s getting its own dose of political action right here at Manitou! Jeff and Mark have been warring for the title of “King” of Manitou, Mark being especially adamant with a political platform of quintuple tuck. Both directors have taken every opportunity to denounce one another as undercover Trump supporters or vegetable-lovers, and camp is heating up in a political frenzy!

On July 4, another head staff member was introduced into the electoral race. We expect to see more candidates coming out of the woodwork as the weeks go on — maybe even Manny will run. We’ll keep you posted as the ballots roll in.

Oh, and one more thing: our first edition of the Manitou Mosquito is hot off the presses! Click here to check out the writerly talents of our creative Manitou family.

2 thoughts on “Camp is: Mike Plume, a morning parade…. and an election?”