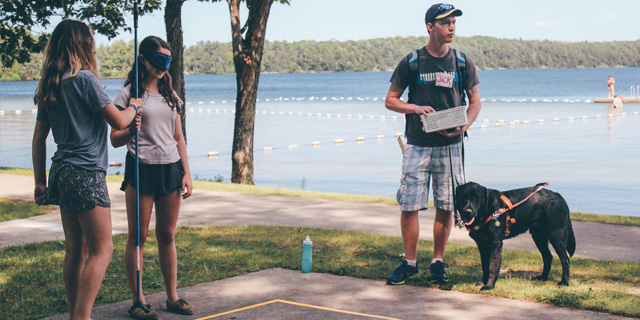 Yesterday we took thirty of our oldest campers, the Leaders-in-Training (LITs), to Canadian National Institute for the Blind’s Lake Joseph Camp. The LITs went on this incredible day trip to learn how people with different abilities function and enjoy their summers at camp and also how to adapt many of the activities we do at Manitou for people with different needs.

When we arrived at CNIB, we were greeted by three staff and one guide dog.  Jack, a visually impaired staff member, guided us through the camp with his dog and his sense of hearing.  Remarkably, Jack knew that we were near a firepit because he “heard the sound of a tree” that he knew was beside the pit!  This awareness of the strength of all our senses was an awesome thing to experience. Surprisingly, Jack wouldn’t tell us his guide dog’s name because he explained that it is incredibly difficult for guide dogs to work when people are calling their names.

As the tour continued, different features of the camp were pointed out that are in place to help familiarize the visually impaired with the camp site. For example, we were shown the different markers along the hand rails that indicated a path, the different angles the railings were positioned along with what they meant and various beepers and other devices around CNIB that help their clients and volunteers to navigate the property safely and with relative ease.

The LITs were impressed with the size of the camp, the variety of activities offered and the independence the participants were granted. While at  CNIB, the LITs took part in a descriptive drawing exercise. Sitting back-to-back in pairs, one partner drew a picture on a piece of paper, then using descriptive language they explained the drawing so that their partner could reproduce it. It was a great exercise for using descriptive language and active listening.

After this exercise the LITs led games and hosted events for CNIB clients.  They broke up into six groups and ran ladder golf, bocce ball, shuffle board, horseshoes, mini putt and music games.  All of the various activities being run were adapted for people with visual impairments.  Interestingly, while waiting for participants to join them, one group played a pick-up game of basketball. Someone noticed that the ball had metal inside that would clang, indicating to someone without sight where the ball was. These small modifications allowed our own campers to understand how small changes can make all the difference to those with disabilities. They learned how easy it can be to change the impossible into the possible.

Our trip to the Lake Joe Camp of the CNIB was a great success.  The LITs were so excited to meet new friends and in return, the CNIB staff and participants were thrilled to have Manitou LITs taking part in activities with them and appreciating the challenges of the visually impaired.  We look forward to going back to CNIB in early August with another group of LITs.