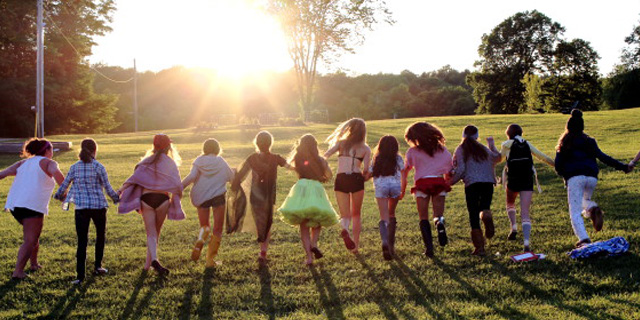 And just like that, Summer 2016 at Manitou is halfway done. Apologies for the interruption in your regularly scheduled programming (blog posts) this past week; between Visitors Day, Tribal Games, our final banquet and an activity awards ceremony, camp has been so full of energy and spirit that we’ve barely had a second to sit down!

For many of you, this post arrives just hours after your kids did. Main field was a scene of tearful hugs and final photographs this morning as our first session campers boarded the buses to head home. It’s been an amazing month at Manitou, one half of what we’re sure will go down in the books as our “Best Summer Ever.” Here are some snapshots of what’s been going on:

For those of you who weren’t here to experience it for yourselves, we’ll fill you in on this past weekend’s spectacular Visitors Day! After weeks of correspondence by mail, campers finally got to see their family members and friends in person this past Saturday. Parents met their kids’ counsellors, activities were open house, and a beautiful wooden picture frame was set up by the lake for photos.

We had a buffet-style lunch set up in the dining hall, and what a buffet it was: grilled chicken, grilled cheese, salads of every kind, hot dogs, sweet potato fries, fruit for days and an ice cream sundae bar! It’s safe to say that no one left with an empty tummy.

The day closed off with a rock concert on camphouse field, performed by our rock staff and campers! Mark and Jeff spoke briefly afterwards about the privilege of having all these wonderful kids at camp, the 20 life-changing values and skills that are learned uniquely at camp, and how this summer’s staff have made it one of our most successful first months ever. And even though it was hard to say goodbye to parents and friends, campers kept busy with a slip n’ slide after the day was done.

It wouldn’t be first month at Manitou without Tribal Games, a one-day camp-wide program that pits four teams against one another in a competition of skill, creativity and spirit. This year’s Tribal Games theme was something entirely out of the ordinary, but all too familiar in the camp sphere: allergies.

Gluten, Lactose, Nuts and Shellfish were the four foods that battled to be “cured” at camp using a traveling salesman’s special antidote. (Don’t worry, the camp stayed entirely nut-free and allergy-sensitive regardless of the games!) And if you think a regular day at camp is full, just listen to this: Tribal Games consisted of a morning sports rotation followed a spirit lunch, and then a two-hour Apache Relay that culminated in a fire-building challenge with the CITs. In the evening, each team presented a song, a dance and a plaque that they had made.

The ultimate winner was revealed in an epic ski-boat presentation, and Nuts took home the title.

Now, we love a good competition at camp. But our absolute favourite memory of Tribal Games 2016 was a moment of unity: When an impromptu flash mob took over the dining hall at dinner, dozens of kids streamed to the front of the hall to dance “The Wobble” together. It didn’t matter their age or their team allegiance; it was just a moment of losing ourselves in the magic of a song, and it put smiles on everyone’s faces.

By yesterday morning, all traces of Tribal Games had been erased — save for a certain new plaque hanging over the dining hall door. Campers had a final few activity periods, collected their projects from Art Hill, and then packed their bags. Our CIT unit put together a wonderful “Fun in the Sun” theme for the final banquet of the session, and we all feasted on chicken, poutine, veggies, and jumbo cookie sandwiches.

Afterwards, the camp gathered at Fireside for the Activity Awards ceremony, where head staff awarded homemade trophies for campers’ participation, talent and positive attitudes demonstrated throughout the month.

Finally, everyone cozied up in the theatre to watch the closing slideshow put together by photographer extraordinaire, Syd Wilson. Check out the video above of everyone singing our camp song at the end of the presentation!

So, that’s pretty much the size of it. We’re back to regular blogging, and we’re so excited to welcome our second session campers to Manitou. Parents, if your kids come home today with special Manitou memories they’d like to share, tell us about them in the comments section! We’d love to hear what made their summer extra special.