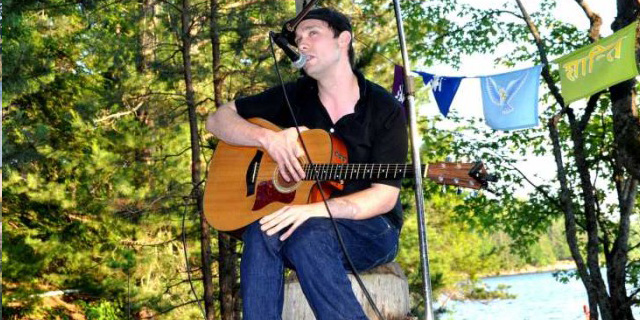 Last night, Manitou welcomed a very musically talented and inspirational visitor to our Friday night fireside. Chris Hendricks, and his manager Aaron Gallagher made the long journey from North Carolina to Manitou yesterday. Chris, is an incredible singer/songwriter but more importantly he is an inspiration to all of us because he is able to pass on a message that is so important and powerful. Chris’ message is related to our theme of the summer – ‘If you are judging everything, you are learning nothing.’

Chris has made it his goal to teach young people how to break down barriers, have faith in themselves and make sure that they don’t let anyone else ever pull them down. At the age of four, Chris was diagnosed with, cerebral palsy. Chris was bullied because of this condition from the time that he was four until he was eighteen. Now, at twenty-nine years of age, Chris is occasionally still bullied, thankfully though he has developed enough confidence and self-appreciation to not allow the negativity of others to effect his feelings of himself. With his motto of “you do you,” Chris has come to the realization that nobody can make him feel bad about himself without his consent.

Mark said at our very first fireside of our 2015 summer, “often it is the people who nobody imagines, who do the things nobody could imagine was possible”. Chris Hendricks didn’t imagine when he was a young boy that he would be a famous speaker and musician – yet here he was, at Camp Manitou, speaking to our camp community, spreading his message of hope and perseverance and singing beautiful and inspiring songs. Chris asked everyone if they had heard the expression ‘seeing is believing’.  He then went on to inform us that the expression is wrong, “believing is seeing!” It wasn’t until Chris believed in himself, in his talent, in his abilities and his endless possibilities that he was able to get out there, accomplish his goals, and see the person he always wanted to be.

Chris performed some of his own songs and told the Manitou community about his struggles with people judging him, with being bullied and with people underestimating him. Chris moved many campers and staff members to tears with the stories of his struggles in relationships, and the hardship he faced looking to fit in.  Hearing Chris play and listening to his stories was an incredible and motivational experience that was like no other.

In addition to the incredible performance and messages from Chris, Our Junior Unit delivered motivational speeches at last night’s fireside.  One camper’s speech included the idea that “when you use social media you judge people without even knowing it… instead of judging someone, try to find the message they’re trying to send first.” At Manitou, we are away from social media for two months and have the opportunity to talk “face to face” and engage in conversation. There is the notion that at camp we are “separated from the world” because of our lack of social media, however this separation actually makes us “10 times closer to the world” and the community around us.

Another Junior Camper said she picked Camp Manitou as her camp because she liked the values. Values like “acceptance, treating everyone with equal respect and not judging others.” She compared friendships at Manitou to friendships at school and said “At school, people may judge you for how you act or for what you look like.  At camp, you are not judged for any of that; rather you are just accepted for who you are.” Her message concluded with “Being in a cabin with so many different kinds of people, it’s important to remember that our differences are what make us closer.  One of the things I love most about Manitou is that differences are not just tolerated, but celebrated and embraced.”

A group of Junior campers performed the Hannah Montana Song “Nobody’s Perfect,” which was a great choice of song in continuing with our theme for the summer.  The song includes the lines, “Next time you feel like it’s just one of those days, when you can’t seem to win, if things don’t turn out the way you planned, figure something else out, don’t stay down, try again.  Everybody makes mistakes, everybody has those days.”

Today Chris spent the morning with our rock and guitar campers actually crafting a new song together and performed it for lunch…the song is brilliant and the campers took great pride in being such a vital part of the process.

This past 24 hours at Manitou was real, emotional, and so inspiring.  A huge special thank you to Chris Hendricks and the Junior Unit campers and staff for making it an evening and morning we will never forget.